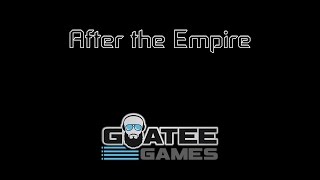 After the Empire - Coming Soon!

The first game we submitted to Steam for the Greenlight process was named, "After the Empire." It wasn't a dark and gritty territory conquering game so much as a bleak and despairing territory conquering game. Like The Viceroy, it was written in Python. But because it was our first game, it had a lot less polish and pizazz! It was actually Greenlit about a year after we put it up, not long after The Viceroy was launched. We have completely rewritten the game in Java, making i

Upon the Threshold of a New Age!

Back and Forth and On and On

If you want to comment on our games, check out our Discussion Forums on Steam: http://store.steampowered.com/search/?developer=Goatee%20Games

Alternatively, you can write to us using the form on the About page, or by writing to us at contactgoateegames@gmail.com